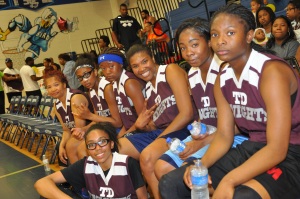 On Saturday, May 9 alumni from Thomas Dale and L.C. Bird High Schools gathered to play in Bird’s fifth annual alumni basketball game. Bird alumni usually play current student players. The game was changed this year to a Battle of Chester by inviting the Dale alumni to be the opposing team. Coach Chevette Waller Evans organized teams on the Bird side. Evans’ cousin, Lachelle Waller, organized the Dale side. Since it is inception, registration, ticket and food sales have been fundraisers for Bird’s basketball program. This year’s Dale registration fees supported TRAKD (trakd.org), a nonprofit started by Lachelle Waller to teach science, technology, engineering, arts and math (STEAM) to local K-5 kids through workshops and summer camps. 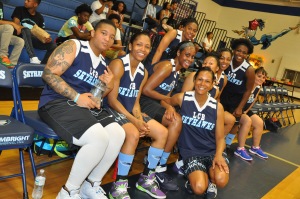 About 300 people turned out to watch the alumni play. The Thomas Dale ladies fought hard, but their small squad, in size and numbers, had a hard time against the ladies of LC Bird. Bird led most of the game. They had strong play all around on offense and defense. Dale had the most senior player of the night, Esther Waller, ‘79. Bird finished the game with a 15-point win over Dale.

One the men’s side, Bird’s roster was at capacity with 20 guys from the classes of 1987 to 2009. Dale had 10 players from the classes of 1990 to 2010. Bird came out strong and led by as much as 15 points in the game. Dale players stayed with the game despite playing longer minutes and having to, at times, defend against the non-stop three-point shooting of Darryl Johnston and 7-footer, Tim Summa. With three minutes left in game, Dale pulled to within five points. A few foul shots and made baskets led to a tie game in the last minute. A late foul put A.J. Brown on the line with a few seconds left in the game. His shot put Dale ahead, and the Knights claimed victory. 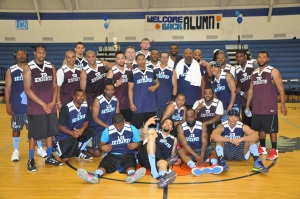 Featured in the Village News.